I frequent it when I’ve got better things to do, and something always catches my eye. Stolen iPhone? Nah. Someone’s old fridge? Nope. Candy red late ’90s Ford Explorer on airbags that has been listed numerous times over the past 4 years? Maybe.

A good chunk of people will tell you Craigslist is full of junk and isn’t worth your time, but what they don’t tell you is that you can score a beautiful 5 speed ’98 Saab 900se Turbo for $450 with a few minor issues.

Now, I’ve personally always liked Saabs, primarily the iconic 900 Turbo of the ’80s in all of it’s overly engineered glory, but I never thought I’d own one.

Sadly for me, this Saab is from a later era, when GM just began to tamper with the recipe, but just before they decided to throw out the IKEA cook-book and re-season the whole meatball.

On paper, that sounds great. Swedish quirkiness with American “reliability”? Sign me up.

But in practice, you get a Vauxhall Cavalier chassis with an impossible mix of weird and painfully boring smacked right on top, plus the 2 liter B234L turbo four in stock configuration is nothing to write home about with its ~200hp and 217 lb-ft of torque.

It pulls though, I promise you.

Did I mention we bought it on the same day from someone with a suspended license whose name wasn’t even on the title at 10:30PM about an hour away on some random side street?

I know that price is too hard to believe, especially with the car running great, and the charming factory British Racing Green paint job in decent shape (if you look past the rattle-canned hood and a few select Plasti-dipped areas). 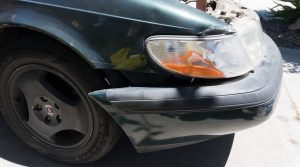 Although the paint work is in fair shape, the body work of the Saab has seen better days. The front bumper is sagging, there’s evidence of a low speed accident, the rear hatch lip seems to be held together with duct tape, and the black rubber has faded from a showroom sheen to a chunky grey sludge. The back does have a turbo badge, which is all that matters.

However, when you step into it, the interior is actually in rather good shape, but I’m not too sure if I’d eat a french fry that I accidentally dropped on the seat trying to change the cassette from the Sweden government mandated OEM ABBA one, either. There’s also an oil stain in the shape of an exhaust manifold on the backseat, but thankfully an overnight RugDoctor rental fixed that right up. The biohazard of a headliner has some sort of pattern that looks like dried blood and it hangs like the roof of a bed sheet fort you made in the family room as a kid, so that’s definitely got to go. Thankfully the original owner either had performance or a budget in mind and decided not to option the sunroof. 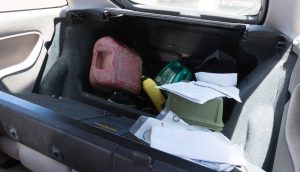 The trunk doesn’t open, which could be seen as a feature in disguise as we will never forget to lock it. Upon dropping the rear seats we found a treasure trove of anything a typical Saab owner should carry, such as fishing equipment, a bucket hat, 2 pairs of Airwalk sneakers, some guy’s medical records, an OEM Saab dipstick, and the holy grail of it all: A grille from (I presume) a late 80s Plymouth K-Car. 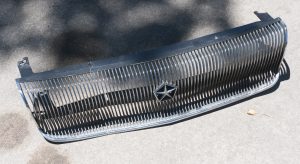 The Saab has almost 200,000 miles on it, and those miles were driven lovingly as seen with a blown synchro on 1st gear, no muffler, and a gear shifter that loves to move around upon acceleration.

Contrary to popular belief, owning a Saab does not grant you a membership to the American Dentist Association, but this Saab in particular will get us into many local car clubs as it’s oozing street-cred. It’s like a turbo Civic in disguise.

Also, the rear window on the driver’s side has a giant turbo snail sticker on it which denotes that the Saab stock 2 liter four’s turbo has evolved into one with a turbine straight from a Boeing 747.

Speaking of jets, the “Black Panel” button that turns off all gauges in the cluster besides the speedometer, which was probably inspired by some sort of fighter jet feature, has a sort of psychological attraction to passengers, causing me to accidentally bounce off the rev limiter. The car is missing the rear muffler so that shouldn’t be a problem, but in true boring Saab fashion, the exhaust note never really seems to change through the rev range. 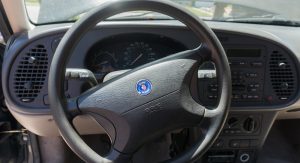 For a Swedish boat, the car handles pretty good around some twisties and in day-to-day traffic, but the way the dash is shaped makes this car feel absolutely massive. The acceleration from 0-60 isn’t as quick as my R56 Cooper S, but it feels faster. Or more dangerous, at least. 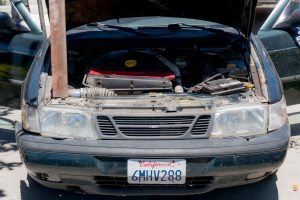