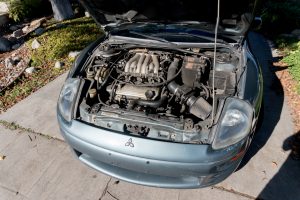 One of the most heinous insults I’ve ever had the displeasure of feeling in my gut stemmed from the cesspool that is reddit.com, and read a little something like this:

you look like the kind of girl that starts banging a 23 year old dropout your sophomore year because he has a Mitsubishi Eclipse and he’ll buy you cigarettes.”

-/u/bumcubble, reddit.com
This comment was posted on a picture of young woman who truly looked as if she could have made some better choices in her twenty-something years on here on earth, but the details here are extraneous. The point is that the Mitsubishi Eclipse 3G is the embodiment of poor decisions from all parties involved, including the manufacturer and consumer.
Mitsubishi saw wonderful amounts of success in their 2G Eclipse with its AWD and turbo 2-liter that would make its appearance in The Fast and The Furious. What Mitsubishi did in the following years can be summarized in a little personal anecdote: It was the summer after I graduated from the 8th grade. I was a scrawny, somewhat odd kid who carried my body weight’s worth of insecurity in the pockets of my cargo pants everywhere I went, and as the result of some paperwork being grossly misfiled by a cosmic office clerk in the sky, I ended up with a girl having a crush on me. Now, this was completely foreign to me, but I liked the idea, and formed a crush on her as a direct reaction to her crush on me. We would stay up into the stillest hours of the night, usually 9 PM, talking over the phone and genuinely enjoying each others’ company. However, once things started really getting serious, such as mentions of actually hanging out with each other in person, I panicked. So I did what any self-respecting young man who didn’t want a relationship would do: called my cousin’s girlfriend, told her to pose as my girlfriend for a cool minute, then tell my sweetheart that I’d found someone else. 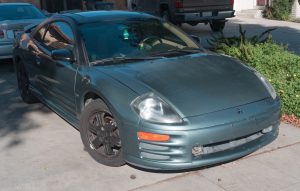 Minus the complete social ineptitude, this is exactly what Mitsubishi did; it’s almost as if they said, “This car is doing too well, we need to make it strictly worse in every way”. AWD was replaced with FWD, the power was scaled back by about 25 HP, and the 2.0 L turbo was replaced by a 3.0 V6 in the GT model, which I do still admittedly enjoy for its torque and the fact that it’s shared by the Dodge Grand Caravan. The exterior got turned into the unloved stepson of a ’94 Mustang, and the manual transmission, due to a design flaw, was designed to wear out its synchros after about 100,000 miles. They modified their clear coat formula to dissolve completely after 5 years of being in the sun (weight reduction), and they figured quality electronics and components were for chumps, though this wasn’t far from Mitsubishi’s typical fare even with their flagship Evos. 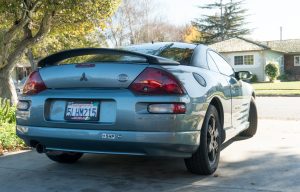 Somehow, thousands of sweet, innocent souls have managed to dodge or completely ignore these flaws and have given this car a very passionate following. The drivers who adamantly and shamelessly defend this vehicle constitute the other half of the bad-decision circle, leaving me to believe that anyone who purchased one is one of three types people: 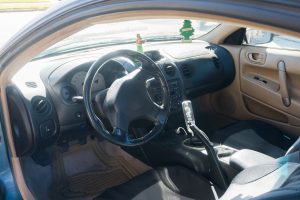 Overall, this car feels about as reliable as your lifting buddy who texts you that he’ll meet you at the gym at 6:15 because he’s running late, tells you he’s leaving at 7:00, and calls you at 7:45 to tell you he can’t make it tonight. Despite being a mediocre passenger vehicle at best, it serves as an excellent conduit for satire, irony, and miscellaneous self deprecation. It is unadulterated crap and I wouldn’t hesitate to trade it for almost anything, even a 250cc motorcycle and a 12 pack of Shock Top.
I love it like a child.

Monroe Vallejo is an English Major from Salinas, California. A post office worker by day and a gym rat by night, he enjoys riding motorcycles, playing, composing, and producing his own music, and short-shifting his ’01 Mitsubishi Eclipse GT for that fuel economy.